The different species can have varying impacts to the environment, different population densities and spread and can be associated with different control measures. Therefore, it is important that, where possible, the correct deer species is identified.

This page contains a list of the six species with descriptions on how best to identify them. You can also download out field guide by clicking below. 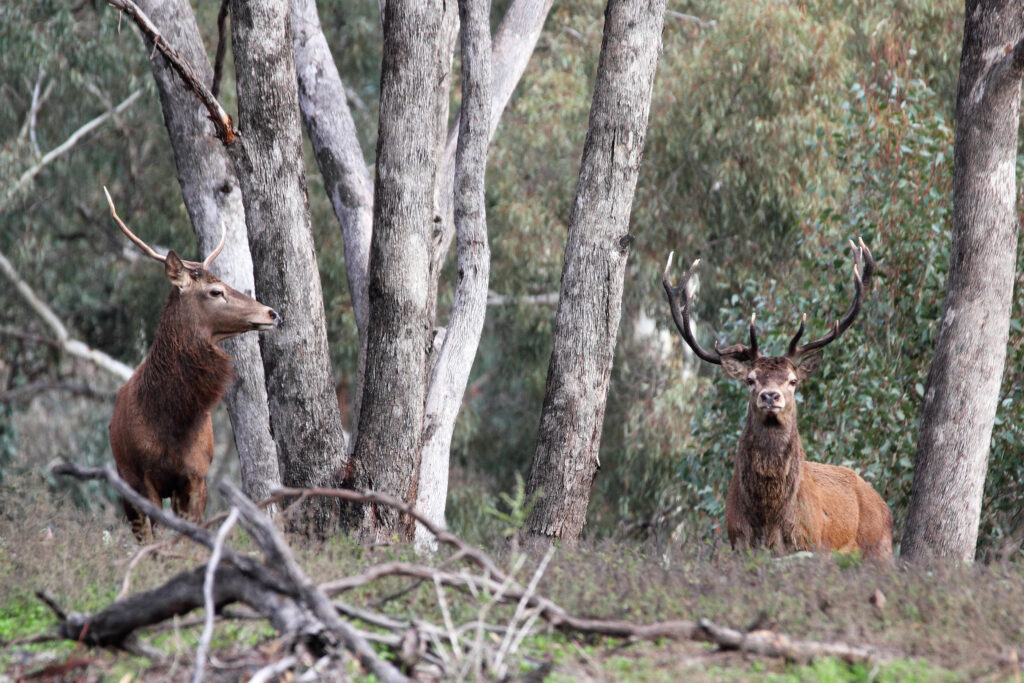 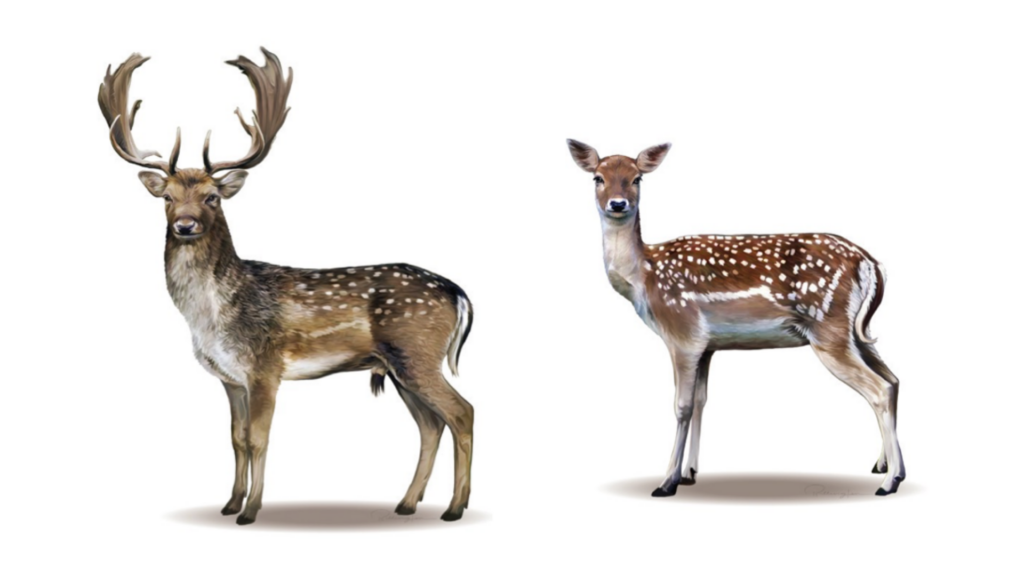 Antlers – Multi-tined, upper half palmate or flattened. Cast in October, reformed by February. Up to 50cm.

Appearance – Coat colour highly variable, from black, to reddish brown with white spots, to lighter brown (menil) with white spots to white. Coat colour variants can be universally present in a single herd. Black and white markings on tail and buttocks prominent. While feeding tail is flicked continuously. ‘Adam’s Apple’ strikingly prominent in throat of adult stags. In rut, the buck makes an unmistakable croak, similar to a grunting pig. The calls vary from high pitched bleating to deep grunts. 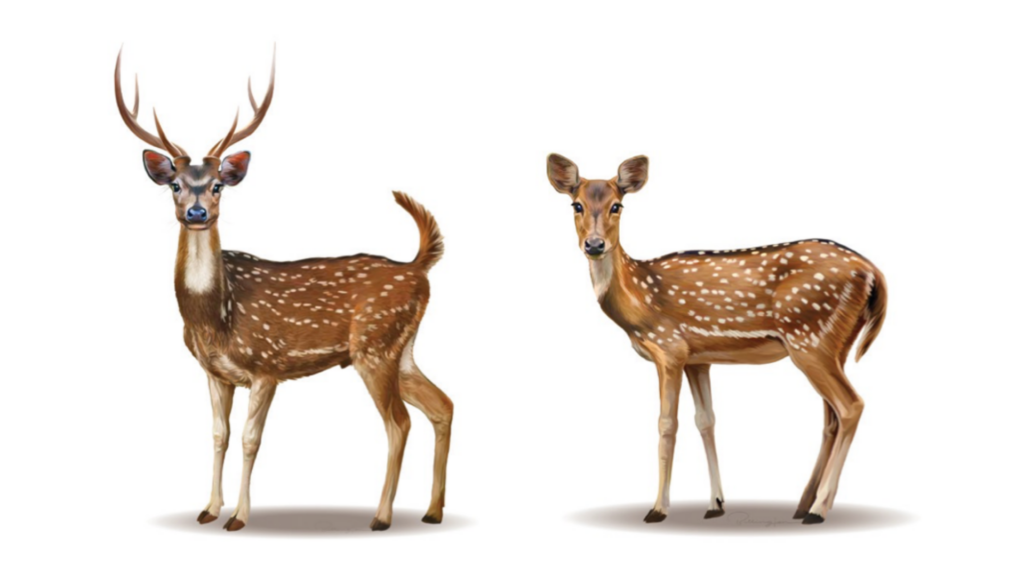 Antlers – Flattened antlers up to 50cm with numerous points.

Habitat – Graze on a variety of grasses, fruit and leaves.

Social Behaviour – They can form herds of more than 100. Females separate from the herd during birthing and rearing of their young. 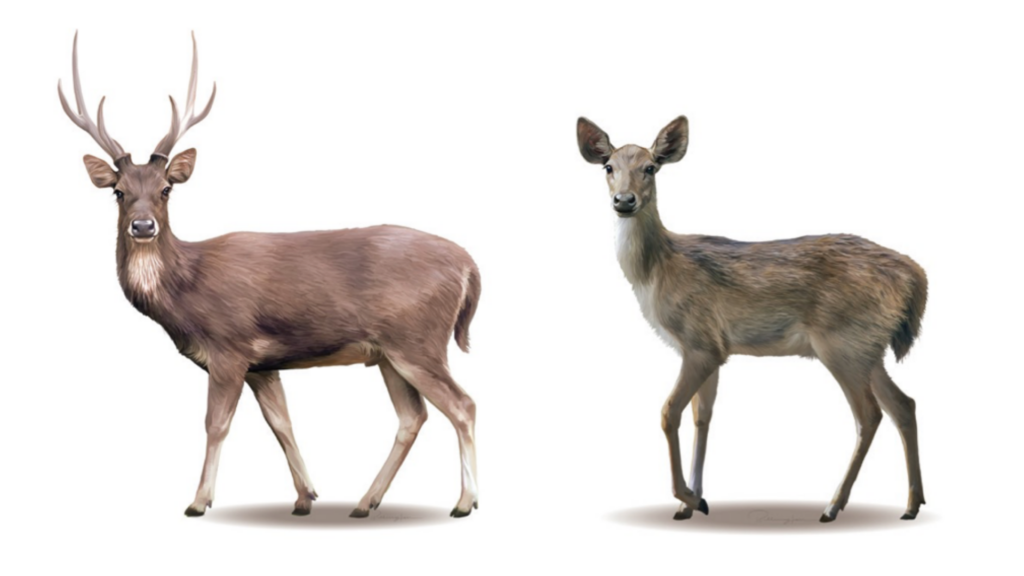 Antlers – Three lyre-like tines. Rear tine on forked pair is always longer than front tine. Round in section. Up to 96cm. 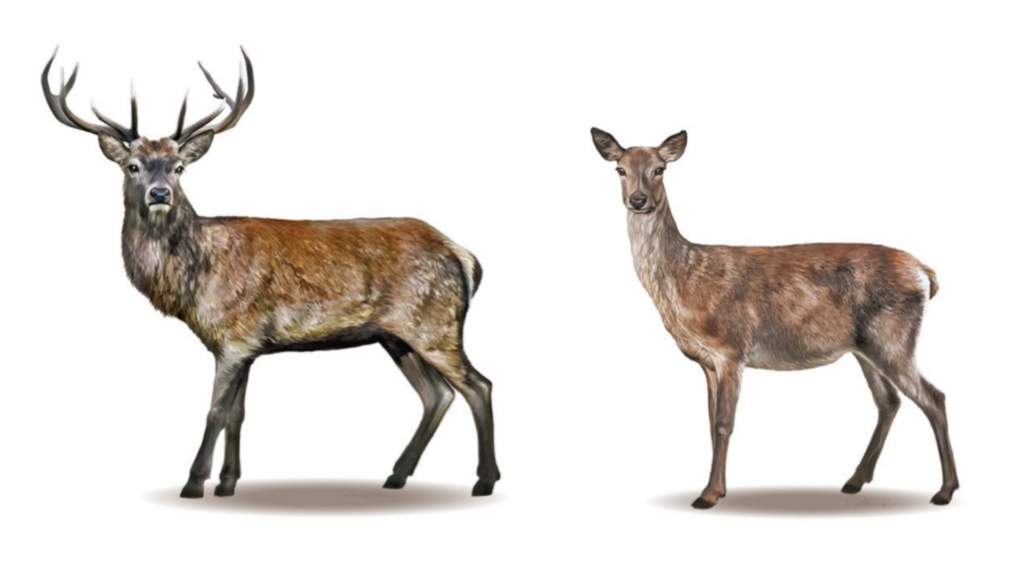 Antlers – Multi-tined, six to eight tines common, 10-12 less frequent. Round in section. Cast in October or November, reformed by February. Up to 90cm.

Appearance – Coat colour changes seasonally, being reddish in summer and greyish brown in winter. Regardless of time of year, a lighter yellow-coloured rump patch is prominent. Calves have white spots along flanks when first-born, which tend to fade within a few months. Tail is small and indistinct. Ears long and pointed.

Habitat – Open forest and woodland with grassy understory. Woodland edge adjacent to grassland. They may be seen in open areas but usually only when it’s close to thick, timbered vegetation. 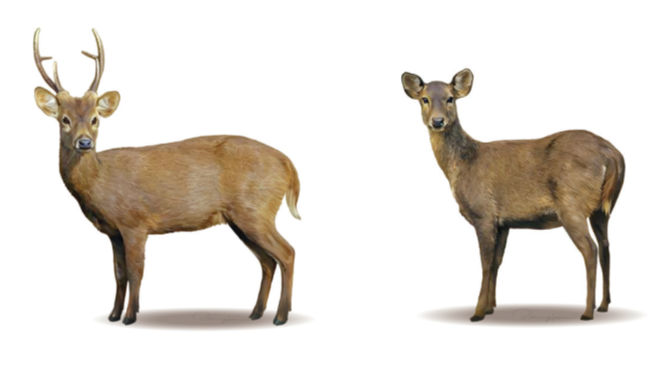 Size – The shortest species of deer. Males can grow to a height of 70cm and a weight of 55kg.

Antlers – Typically short, around 30-35cm with usually three points on each site.

Appearance –In summer the coat colour is a uniform yellowish brown to reddish-brown. Sometimes pale cream spots may be present. In winter, coat colour is dark brown. Newborn calves have white spots. Tail rather long in proportion to body, white underneath and at tip.

Habitat –Typically found along the coast in freshwater and saltwater marshlands, heathland, woodlands and forests, often adjacent to farmland

Social Behaviour –Typically solitary or in small groups. Larger congregations of animals may occur where food is locally abundant 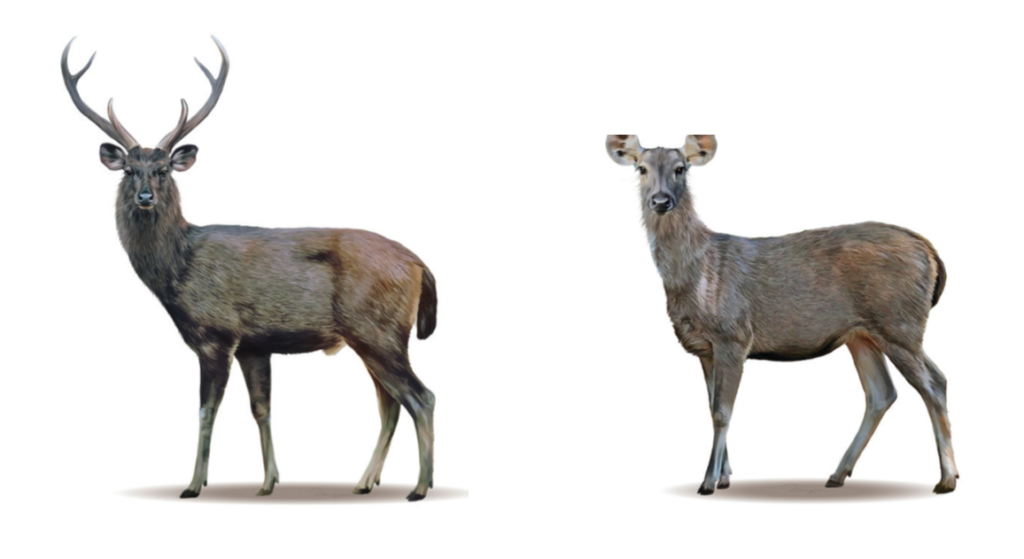 Antlers – Up to 70cm with three tines per antler –  a single brow tine and a terminal forked set of tines.

Appearance – Coat colour is uniformly dark brown, though lighter coloured on the belly and the inner sides of each leg. Characteristic large rounded ears, about half the length of the head. When disturbed, individuals will raise bushy tail over back and rump-hair will flare.

Habitat –Widespread and adaptable species. Though often associated with tall wet eucalypt forest, often occurs at the edges of farmlands, and is known to inhabit heathland, woodland, dry forest and rainforest.